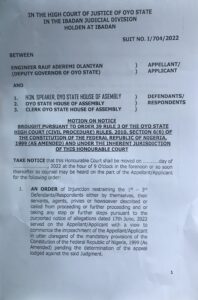 Front copy of the appeal document

Oyo State Deputy Governor, Rauf Olaniyan has appealed the judgement dismissing his suit against the plan of the Oyo State House of Assembly to begin an impeachment process against him.

Counsel to Olaniyan, Chief Afolabi Fashanu SAN confirmed the development to newsmen, noting that he has filed a notice of appeal and application for stay of execution of the judgement.

You would recall that Justice Ladiran Akintola had dismissed the suit saying the defendants have not breached any constitutional provisions on the matter.

When asked about the directive by the house of assembly for the CJ to constitute an impeachment panel against the deputy, FASHANU said that he expects the CJ to wait for the decision of the court pending the hearing of the appeal while insisting that it would be a blow on the rule of law if the CJ moves on with the impeachment panel.